A renovation is always radical for residents, especially if you live in an apartment complex with many floors. Because often the stairwell and the lift shaft must also be tackled. This was also the case with the renovation of the Cliostede residential complex in Eindhoven, which was commissioned by the Woonbedrijf housing corporation over the past six months. In order to tackle the renovation efficiently and in a public-friendly manner, temporary barrier-free galleries were designed and installed on the outside of the complex. Including emergency stairwell and temporary passenger lift.

Read more about our temporary galleries

Over the past few months Cliostede, the residential complex on the Cliostraat in Eindhoven, has been renovated internally on a large scale by construction company Knaapen Groep. The complex of 140 homes has nine floors without permanent galleries and seven internal entrances with a stairwell and lift. The internal passenger lifts, but also the kitchens and bathrooms in the flats and the central heating system have been completely renovated. It was a major operation, with the intention of minimising the effects of the renovation for the residents.

A plan for accessibility

This temporary lift facility is equivalent to the normal lift, so with standard automatic doors, lift components and, of course, a speech connection. "Within RECO, we have designed and developed this lift ourselves in response to the request from many contractors to come up with a public-friendly lift solution. As a family business, RECO has been active in equipment rental for more than 65 years, so we can fall back on a lot of experience. Since 2006, we have been developing and supplying a temporary passenger lift facility that can be used without the need for protective equipment such as helmets and shoes. This lift is fully compliant with the NEN 81-20 standard, which also applies to indoor, fixed lifts. What distinguishes our lifts is that they fit in a modular lift shaft developed by us. In fact, this shows that a permanent lift can also be used temporarily. This also guarantees the safety of the residents, who previously had to travel back and forth in a custom-built construction lift. We started using these kinds of lifts in 2006 and, after years of development, we have arrived at this fully-fledged solution." 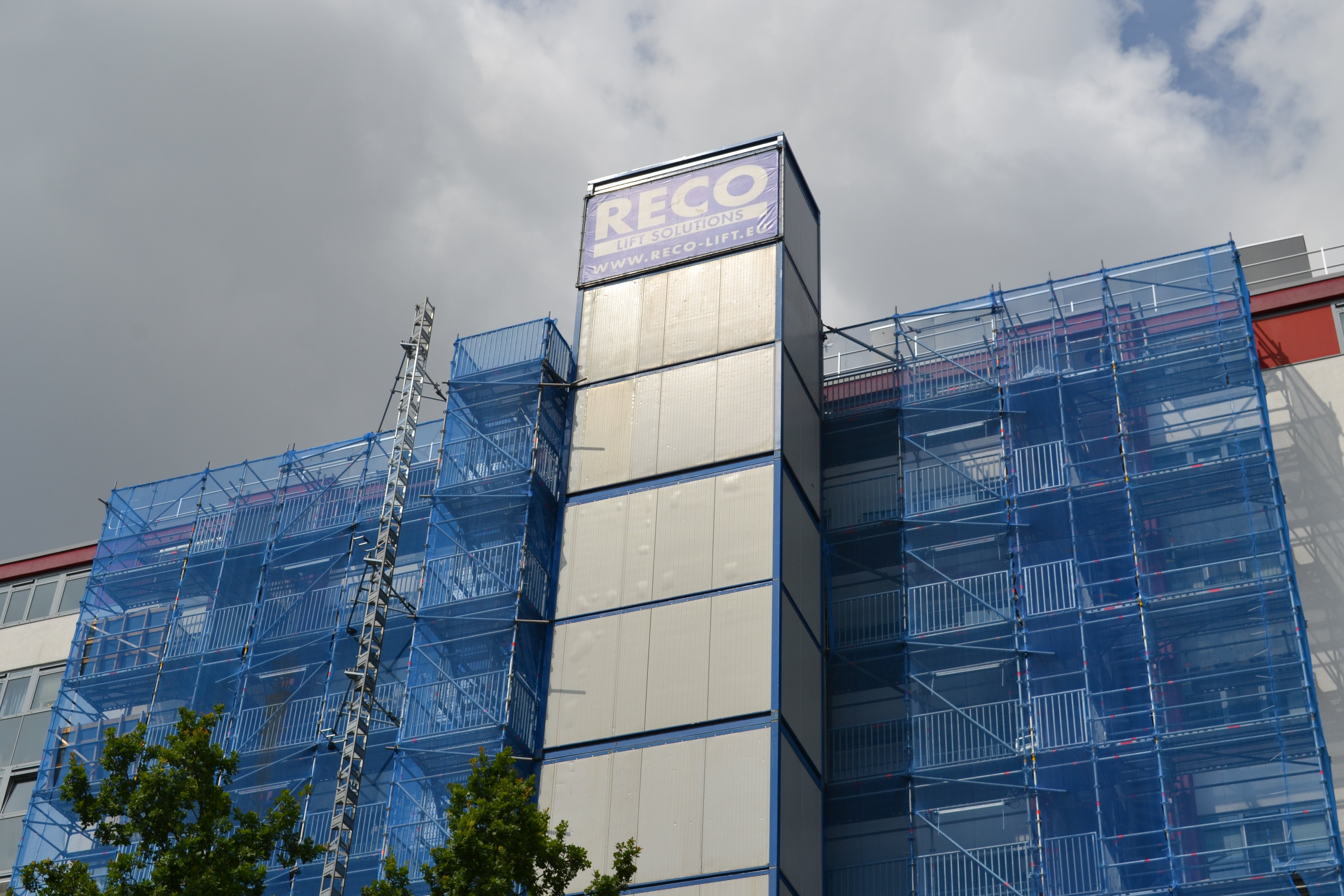 To install the galleries, a solution had to be found for the canopies above the entrances. These canopies protrude by a number of metres and would have had to be dismantled to support the galleries. RECO was able to cover the canopies with its support equipment, so that Knaapen Group could avoid extra work and damage to the complex. It will not be the last apartment renovation to which RECO will contribute, Van der Bruggen knows. "Especially flats from the sixties and seventies in the housing stock of many housing corporations will be renovated in the coming years. It's about time, because they are getting older and need energy improvements."

The RECO-designed lift system with modular shaft has been developed to such an extent that it can be used not only in the construction and renovation sector but also in other places, explains Robert van der Bruggen from RECO Lift Solutions. "Think of retail, such as IKEA, but also stations and airports, when renovating terminals (see photos of Manchester airport and Amstel train station). We also work for major contractors in industry such as Bilfinger. We now have 70 temporary passenger lifts, and in total - with more than 800 construction lifts - we have more than 1,000 lifts: from stairways to construction and passenger lifts," says Van der Bruggen.

Have a project in mind? Request a quote!